note: I republished this on HackerNoon.com

Recently I read the book Trend Following By Michael Covel which is a wealth of knowledge and interviews on systematic traders using trend following approaches. I was so swayed by the data in the book that I decided I wanted to explore more and build some trend following systems with the goal of beating the S&P500 in backtesting.

OK First, What is Trend Following?

Trend following is an attempt to take a advantage of a feature of markets: they trend. This means over periods of time a market moves consistently in one direction, rather than fluctuating randomly. In the book Covel backs this up with hundreds of years of historical data across many markets to prove it.

In this blog post I am going to be using two sets of moving averages as the indicators, and when they cross I am going to use this as the buy or sell signal. This is the famous MACD (Moving Average Convergence Divergence). In fact in Covel’s book many people say they simply use moving averages and he includes a paper that outlines how a simple moving average cross system beats many buy and hold strategies.

OK, Second, How does one “Systematically Trade”?

Systematic trading just means you develop a trading strategy that is rules based. You follow the rules of the system and implement it. This is algorithmic trading, with your rule set being the algorithm. You can implement the system manually or you can write a computer program to do it for you. Being an engineer I want to automate things and develop systems that make the right decisions without human input. So obviously I want to automate my system.

The other advantage of automating your trading system is that it takes the temptation to override it away from you. Complete automation forces you to adhere to your system. I am an experienced investor but not much of an active trader, so it is very advantageous to avoid this possible pitfall.

Quantopian is a company that gives you a platform to build and backtest trading systems. Everything is in python and they have data for a lot of markets that goes back pretty far. I started out using Quantopian, but I ended up switching to QuantConnect, which is similar but actually has live trading. For a monthly fee QuantConnect will let you trade your algorithm live against your Interactive Brokers account. You can write your code in either Python or C# here.

What is the end goal?

My goal is to actually develop a good system that will trend trade several markets at once and trade it live! Here are my general goals, broadly speaking:

The last goal is very important. If you are familiar with data science or machine learning you will have heard of “overfitting”. If my strategy is so optimized that all it can do is beat backtests it will likely fail in the future because I will have effectively data mined the historical information to over-optimize it. So avoiding overfitting is key!

Let’s get going. Here is the basic strategy.

The above is a chart of Nvidia stock over the past couple of months. I plotted a short exponential moving average and longer simple moving average. You can clearly see the crossover points occur and the trend change direction. When the shorter period is on top you buy, when the longer period is on top you sell. I have the crossovers marked with “BUY” and “SELL”, you can see how this would be profitable. It doesn’t always work out that nicely, and the market doesn’t always trend, but in trending markets this works well.

To be clear I may not end up using these indicators. But the following are experiments using the the Exponential Moving Average as an indicator or “EMA” from here on out.

SPY is an ETF that tracks the S&P500. S&P500 is my benchmark to beat. So I want to first ensure that I can beat SPY alone just by trend trading. Short period is 50 day EMA. Long period is 150 day EMA. No leverage. Long and short. Code is here. 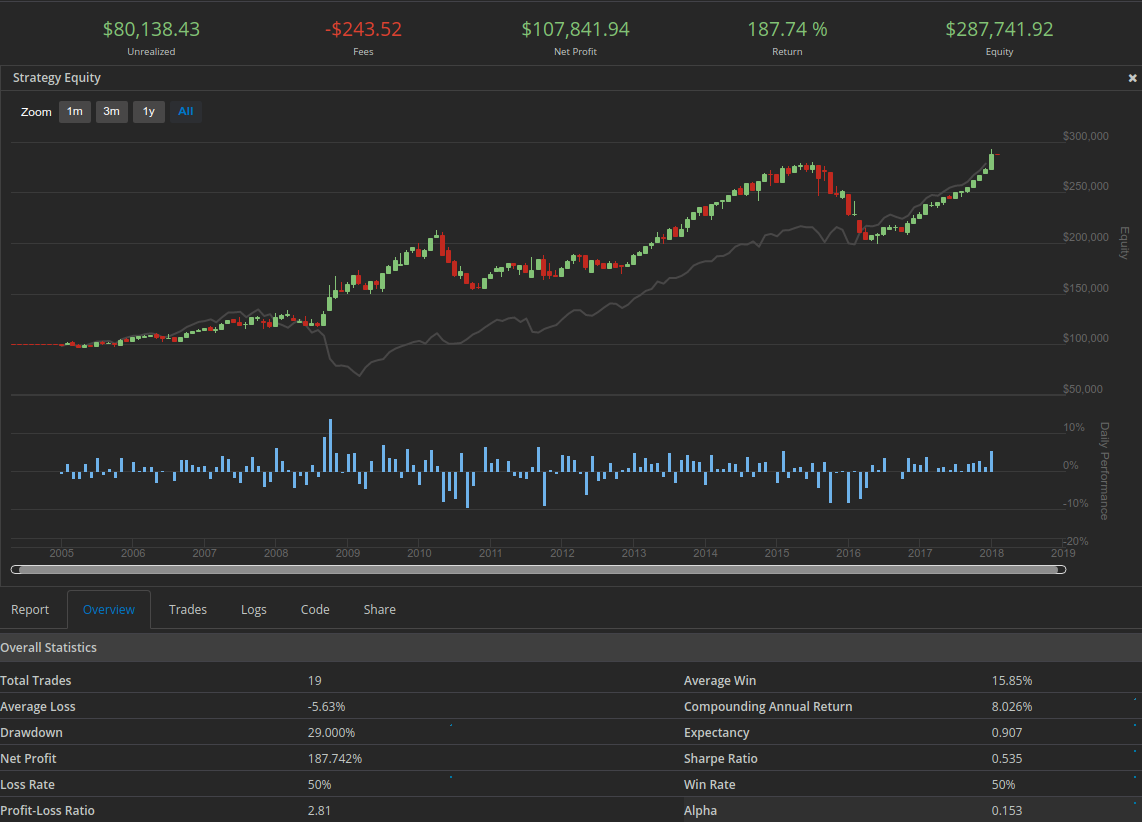 Actually this is a good start: we kept up with the benchmark and suffered a 29% drawdown at the worst. Sharpe Ratio is only 0.535, we can do better.

We are now going to do the same thing as above but just long only. That means no shorting, we just exit the market entirely when the trend is down. Everything else is the same (same code I just change “longOnly” to “True”). You can clearly see in the chart in the period of the great recession where we exit the market and no trading takes place. 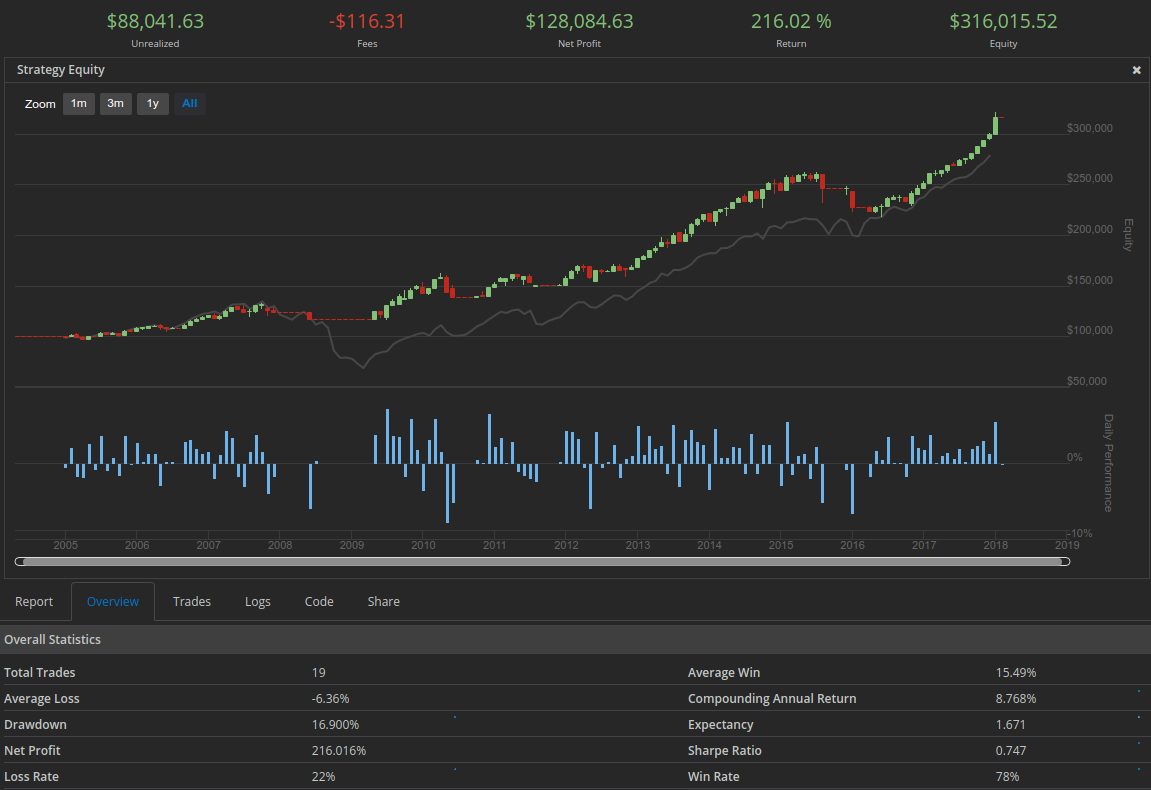 The result is interesting: the 2015/2016 period was very choppy and confused the moving average system. By not going short we saved ourselves a lot of pain here. Sharpe ratio is a measure of risk adjusted return - so since our volatility decreased sharpe ratio went way up. This system actually beat the market a bit.

We keep everything the same as above but we will add a bit of leverage. We will buy on margin at 1.25 ratio. So 25% will be borrowed. This will increase returns if the system is good, but it also increases risks. 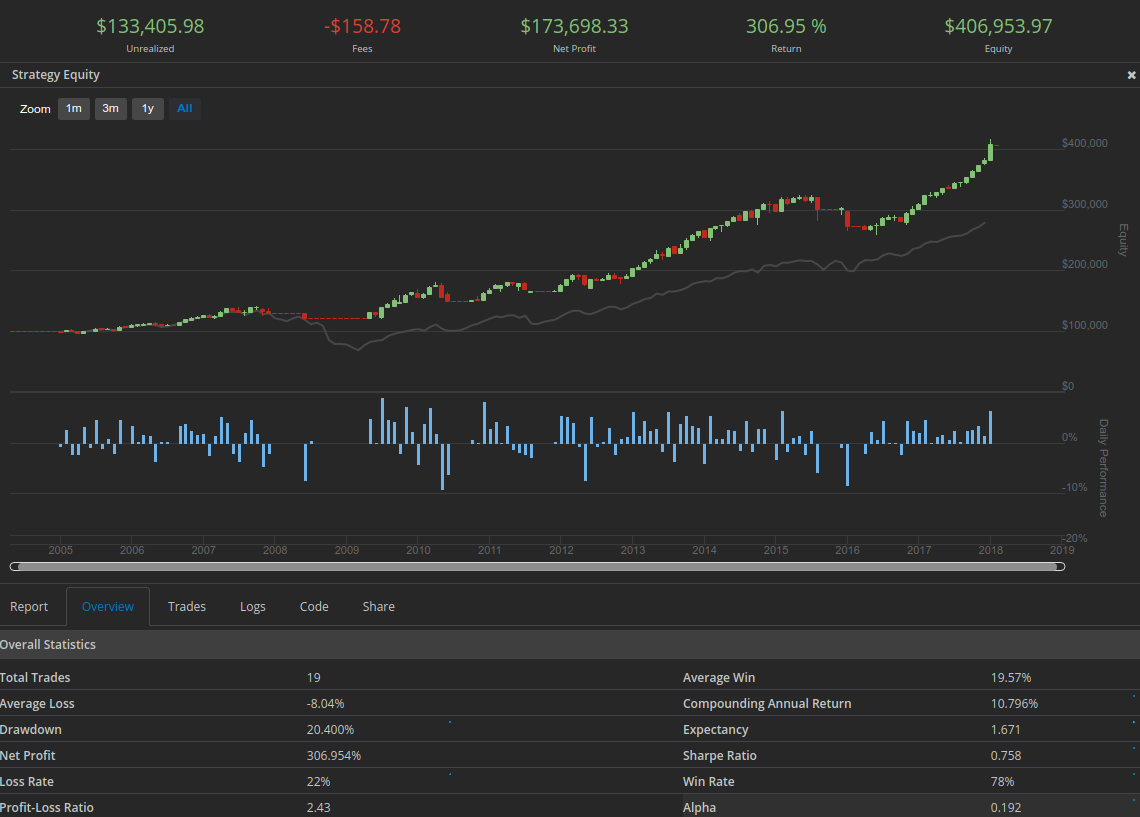 So you can see from just a little bit of leverage (which we pay for), compounding annual return is greatly increased to 10.8% almost. Can we do even better?

We will slightly modify the algorithm now. I am going to have the system hold TLT (a treasury bond etf) which will pay us some interest while we wait for SPY to return to an uptrend. TLT should also be weakly inversely correlated with equities so it may increase while SPY goes down. Note that TLT is not purchased with leverage. Here is the updated code 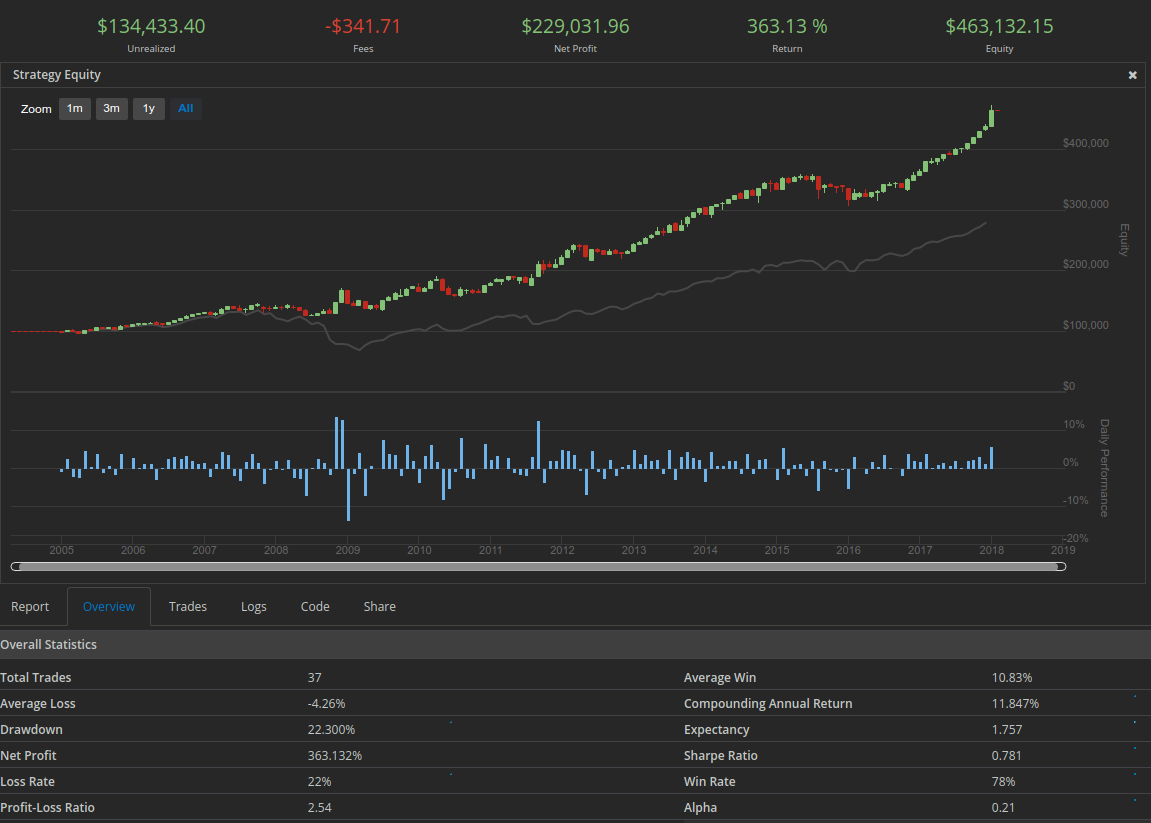 Results: every metric is increased

From simply holding treasury bonds while we are out of the market our returns are greatly enhanced. Compounded annual return is up to 11.85% which beating returns for the S&P500. This is starting to hint at the magic of trend following. What if we hold something else in a strong uptrend? What if we can measure the strength of the uptrend and always be in the strongest trends? Regardless, this simple 2 ETF strategy seems to work very well if the market is a trending market.

We are going to try something different now. I am going to keep leverage metrics the same and the EMA cross signal the same 50 / 150. But we are going to trade a couple of cyclical stocks. Chevron (an oil company that drops when oil drops), Deere and Caterpiller are cyclical and tied to construction and agriculture, and finally Ford which is the definition of a cyclical stock.

Plain old buy and hold benchmark of these 4 stocks: 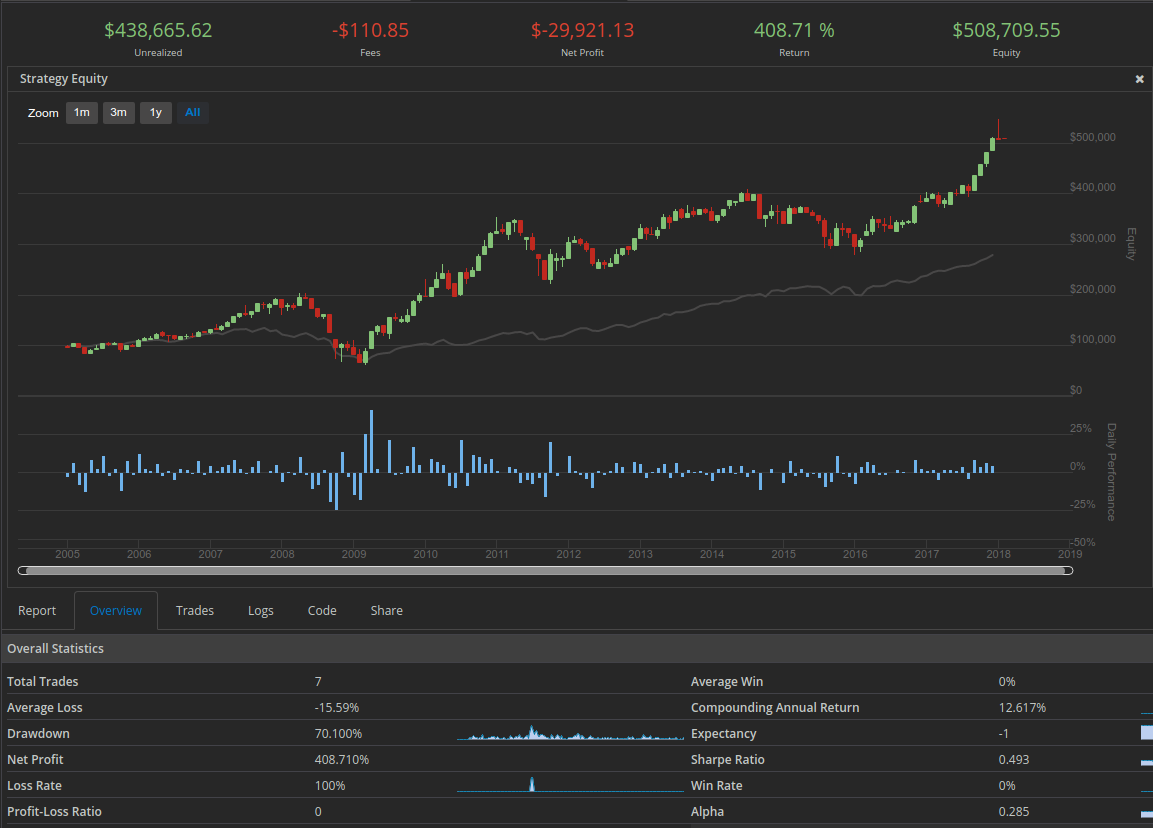 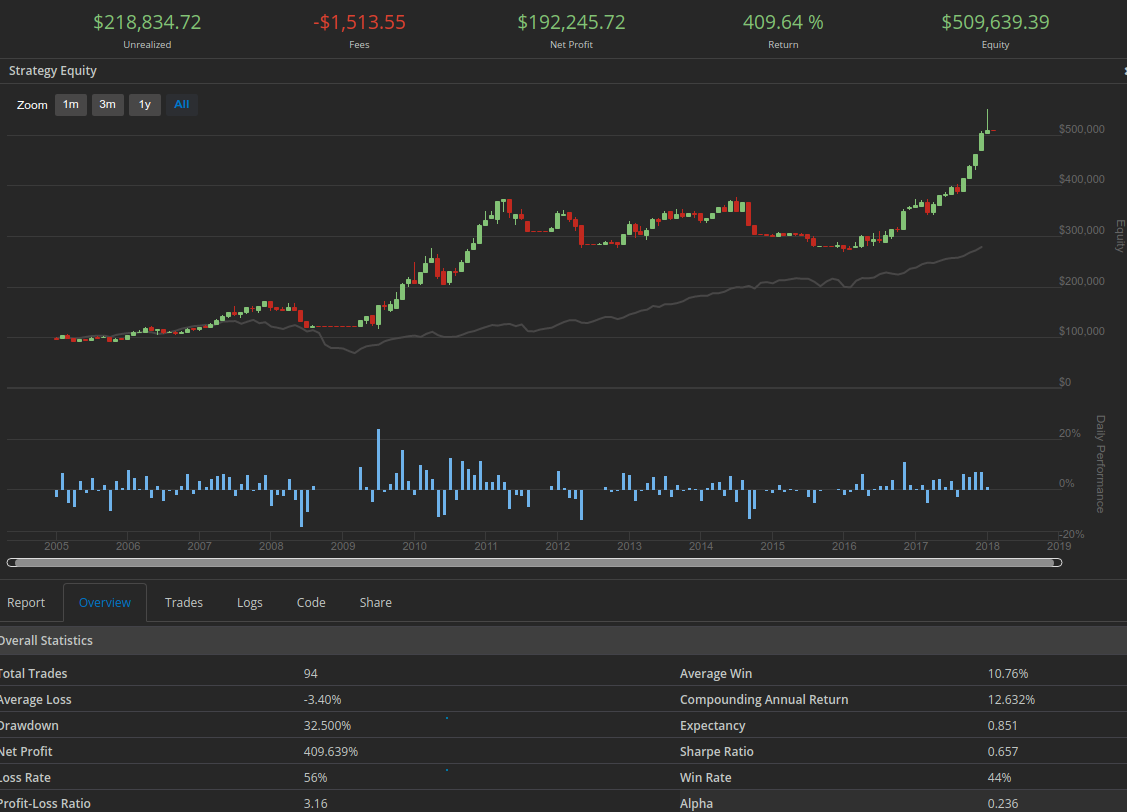 So the algorithm didn’t have any alpha but it didn’t underperform. Even with the fees from the churn it did alright. One massive advantage was that we minimized the max drawdown a lot. Buy and hold lost 70% in one year, while our trend trading system only lost 32.5%. So how could we optimize this more? Well, I didn’t do the buy TLT trick when things were not trending. Even better I could have overweighted the trending stocks so that all of the cash was always being used and always being deployed in an uptrend. Or I could have gone short. I could also optimize the EMA periods a bit more based on the volatility of the stock. I’m going to work on some of these optimizations for the next post.

This is just a quick summary of my initial explorations with trying to build a dirt-simple trend following system. I will have more to follow up with this soon, but first I want to talk a bit about what we could learn from this exploration.