Wait For The Crash And Pick Up The Pieces

In my previous post about ultra long term trend following I introduced the concept of building a technology tree and actively trying to bet on each emerging technology.

The first problem is easy: wait. The second problem is a little bit trickier: sometimes there never is a “safe” entry point. And the last one is of course very dangerous as well - you simply lose when you bet on something that never gains traction.

So when & how do you bet on emerging technologies? It is not so easy to just “apply the Kelly criterion”. You probably should not bet on everything either.

There is a saying when it comes to new technology: in the short term the impact is overestimated, but in the long term the impact is underestimated. But, there is a possibility as well as that a technology never catches on. One of the most hyped up and highly anticipated technologies that has not had much adoption recently is Virtual Reality. Related to that is the group of technologies classified under Augmented Reality (which have had adoption).

Now you could absolutely argue that augmented reality is making serious inroads: Snapchat & TikTok filters, games like Pokemon Go, and voice recognition interfaces can all be classified as AR tech and these are all very well established. I have my lights wired up to Amazon Alexa, and I find it convenient to speak to this device for a few limited tasks nearly every day.

But it’s true that Google Glass flopped, and these always-on visual overlay style AR systems have not caught on yet. And while there are now many commercial VR headset gaming system, we are not all working in VR workspaces and there is very little overall adoption of virtual reality systems. VR is a frustrating case because there have been hype cycles here going back to the early 90’s (see Lawnmower Man).

So it’s not actually safe to bet on technologies as soon as they are released, they may fizzle, they may die, or they may stagnate for many years.

A useful way to think about these technologies is terms of Gartner Hype Cycles. The concept of a hype cycle captures the idea that there is a phase of excitement at first, then things become over-hyped, followed by a crash, and then slow real adoption over the long run.

Let’s look at a few historical hype cycle charts and see which things died and which survived. These are very instructive to look at, you can probably categorize outcomes into the following: 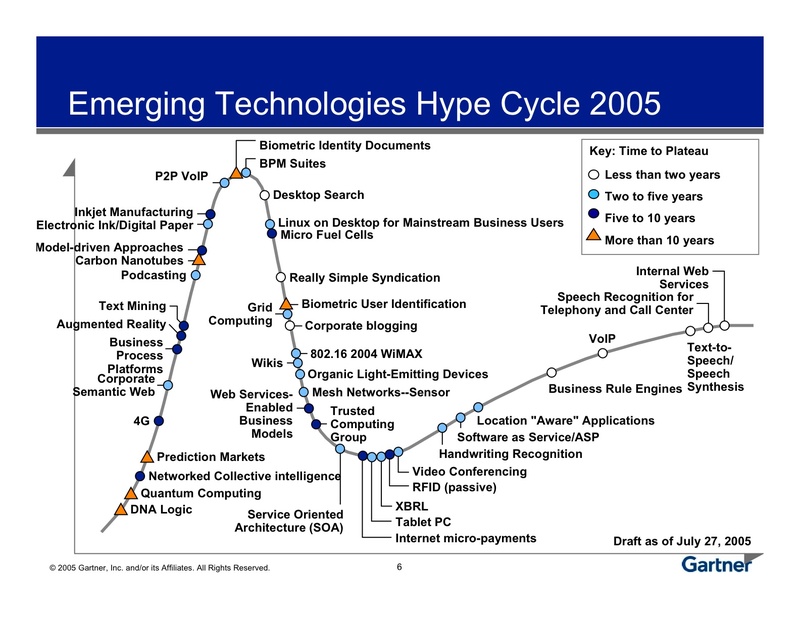 2021: quantum computing still does not have any applications, neither does “DNA Logic”. Prediction Markets however, are widely used and looked to during e.g. presidential elections. There are many commercial prediction markets and sports betting is legalized in many jurisdictions now (many of these platforms support both).

“Text Mining”, I think they might mean natural language processing and machine learning on text. Also very heavily used (actually I’m currently working as an engineer on a project using this technology). This is very heavily adopted.

“Linux on Desktop for Mainstream Business Users”… hilarious! No.

Carbon Nanotubes: we found out they cause lung disease, still they do have some commercial applications. 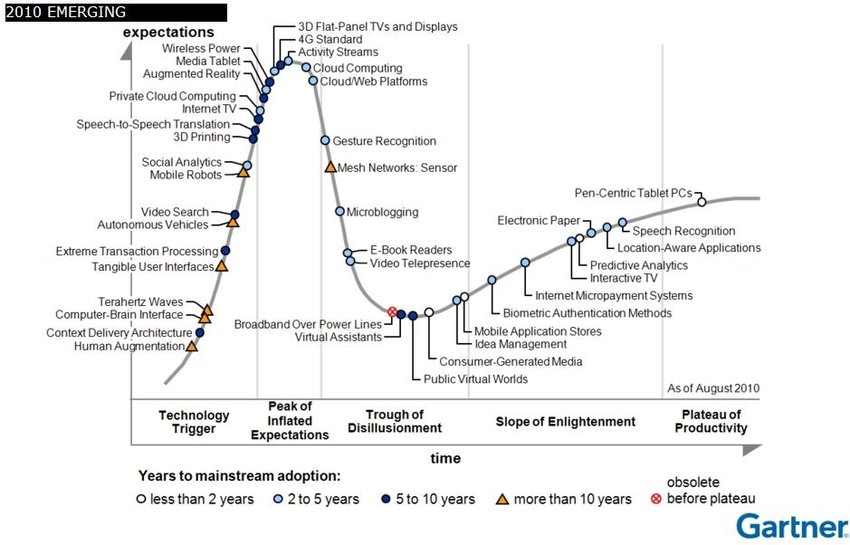 Mobile robots? Yes we have drones and they are very popular. Mesh network sensor systems? Yes there are a lot of maturing IOT technologies now & some have mesh network implementations.

Human augmentation? Arguably we are pretty far from off from that outside of pacemakers and hearing aides.

Interestingly “public virtual worlds” is listed at the bottom of the hype cycle in 2010, and 2011 was when Minecraft was released. Roblox just IPO’s this year to much fanfare. I would say these are very popular now. Aside: there will be interesting combinations with public virtual worlds and NFTs in the future but in my opinion NFTs are overhyped now.

It’s funny they put cloud computing at the top of the hype cycle in 2010, implying it would crash soon. Actually cloud computing has just linearly progressed in adoption and it is not slowing. Basically every software system I have worked on for years has been deployed to a public cloud infra, whether it was AWS, GCP or Azure. 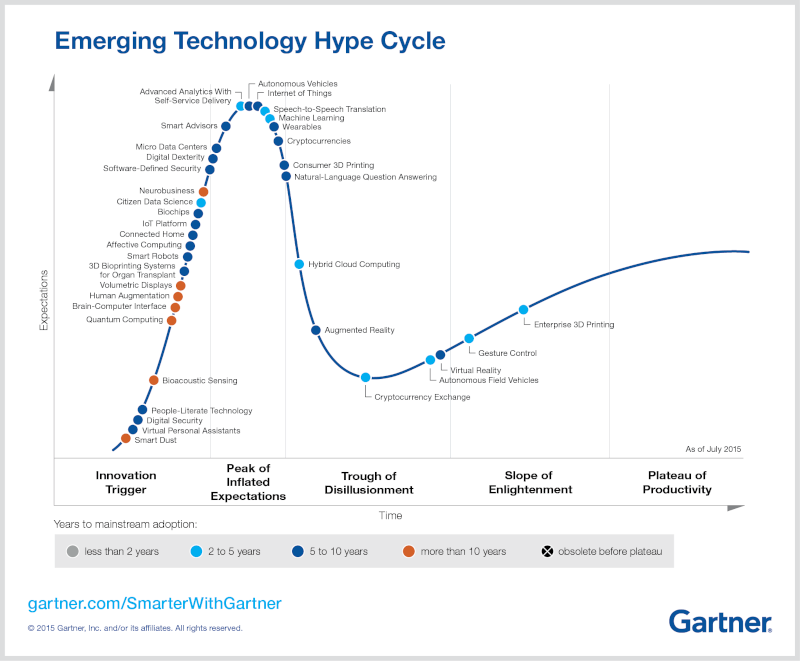 Autonomous vehicles: yes overhyped 6 years ago and still not delivered. No, self driving features on Teslas are not level 5 yet.

Internet of Things: also arguably a top here that was called correctly. I remember this was when all of the pointless IOT devices (why does my toaster want to ping the internet ???) were coming out and my now current colleagues were all working for IOT startups that have since been bought and rolled up into larger companies. 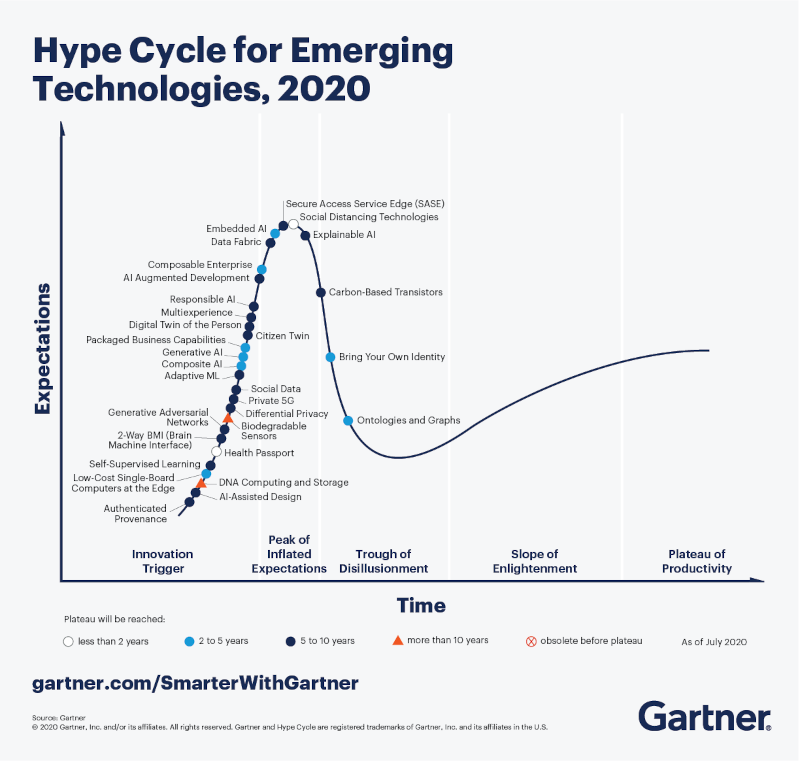 Not much to say here since we are still watching things play out. I don’t actually know enough about all of the different types of AI listed here to distinguish between them all that much. This makes me realize how much reading I need to do.

It does strike me how many machine learning / AI categories are listed here. I feel like AI was overhyped a few years ago but now people are dealing with trying to put machine learning into everything and it is hard. I have now worked as an engineer on several machine learning projects (patent pending on one from Target), and am currently working on one. It is a lot of work and you need experts in several fields to productionize one.

I think overall we are in “Trough Of Disillusionment” in trying to build real machine learning applications because it’s harder than we all thought.

Waiting For The Crash

Given the problems outlined above (namely: some trends fail, some trends get overhyped, and some take too long to really begin) I believe the safest way to take these bets is to wait for an identifiable crash and then bet on the strongest participants that look like they have a chance of long term survival.

There have been several mini-bubbles / hype cycles & subsequent price crashes in various tech sectors over the last several decades. I’ll list some very old ones too just to show how ingrained this is:

These all crashed but in the intervening years you could have picked up many of these companies / assets on the cheap. Part of my thesis of ultra long term trend following is that trends are speeding up, and new developing technologies are being brought to market faster.

You could have bought Sunpower very cheap many times when it was not in a frothy market. There were several good opportunities to pick up Bitcoin at a huge relative discount to recent prices. Amazon was an excellent buy in 2002.

What If There Is No Crash?

Recently the big trends in social media and cloud computing have been difficult to chase. Value investors have notoriously avoided the “FANG” stocks but it’s clear that the pullback in PE ratios never came. The big tech stocks (Apple, Microsoft, Amazon, Facebook, Google, Netflix, etc) just kept growing at an incredible pace. They are now the largest companies in the world and touch every aspect of our increasingly digitally enhanced lives.

In 2016 Amazon was very expensive by any valuation metric, but it was growing rapidly. It was about $800 / share and the PE ratio was around 150 to 200. Revenue growth was more than 30% annualized. Prices to sales ratio was about 3. Their market cap was around 300 billion. Incredibly revenue growth actually accelerated. Last year revenue was 386 billion, they are #2 on the fortune 500 now. If you forward adjust the price / sales ratio from 2016 to today, they were trading at a price / sales ratio of less than 1 on today’s revenue, PE based on today’s earnings would be about 20.

So the best time grab one of these growth stocks is when the market becomes inefficient broadly in your favor, because under normal circumstances the market assumes the growth trend will continue and they are priced based on this. If you can’t find a place where the market is broadly inefficient to buy in (think the 2001 crash or the 2009 crash), then you just have to buy and hold as you identify the trend.

This is the hardest thing to do: buying something you know trades a premium that assumes everything will go right. But often times it is your only choice.

Amazon is a play on several internet based technologies: E-Commerce and Cloud Computing. The cloud computing trend is mushrooming more and more: infrastructure as a service, machine learning as a service, edge computing services. This bet is actually becoming better and better the more they entrench into these new emerging markets.

The conclusion here is that you have to make bets not only when the odds are in your favor, but also when you have no advantage at all. You have to identify over-hyped areas of technology markets and wait to buy the survivors of the crash.

But you also have to continually place bets on the mega trends.

What is a Mega Trend? I think THE INTERNET is a mega trend. This is a fundamental technology that enables more technologies (as I mentioned above, it spawned cloud computing, e-commerce and IOT). The best time to allocate to this is when markets broadly become inefficient and crash. The second best time is always. You can always bet on the biggest players and unless something disrupts this trend it makes sense to continue to bet on them.

But there are many micro trends that get overhyped and then crash. Maybe these are not foundational, or maybe they are just early and have not spawned child technologies yet. One example I’ve mentioned a lot is cryptocurrencies. These were a microtrend and there were multiple hype cycles where you could begin to allocate. However, due to the mass adoption recently and the advent of applications on top of blockchains (DeFi applications, micropayments, NFTs), this is now a Mega Trend in my opinion.

Therefore you should always allocate to the main base layer bets here (Bitcoin, Ethereum, the exchanges), but you should NOT allocate to the secondary technologies yet until they crash again. Among these super hot DeFi protocols many will crash and disappear, so right now is probably the most dangerous time to place bets here. The current NFT markets are clearly frothy and already popping at the time of writing.

Mega Trends Should Be Simple To Spot

Remember I mentioned that according to efficient market hypothesis the growth stocks priced “correctly”, as though current trends will just continue. You are effectively making a contrarian bet if you bet against this.

Peter Thiel said this in a recent interview:

Jim Cramer came up with the FANG acronym on Mad Money in 2014. If you just followed his advice you would have made eight times your money in the last six years. You would have done better than any venture capitalist… My candidate for the investment that is so big and so stupid … is to just buy bitcoin.

So Thiel has dubbed this particular technology a new mega trend, and after so many hype cycles to me it looks like we are seeing mainstream adoption and secondary technologies developing (micro trends) so I tend to agree. This is now a megatrend and it safe to allocate.

Here the link to the full interview - I linked to the twitter quote above because I figured it would have more longevity.

In this post I wanted to flesh my thinking more on how you can qualitatively think about technology trends and when the best time to allocate might be.

In summary - you have:

I’ll continue to write about this concept of ultra long term trend following based on technological and societal trends. The hardest thing now is to try to apply a qualitative approach to these observations that are very qualitative in nature.