Predicting What Will Happen in 20201

The other day I saw Brent Johnson (the guy with the famous “Dollar Milkshake Theory”) post this fascinating survey result from Deutsche bank to Twitter. He made a remark about people not worry about sovereign debt crises, which we will ignore for now and just focus on the graphic. 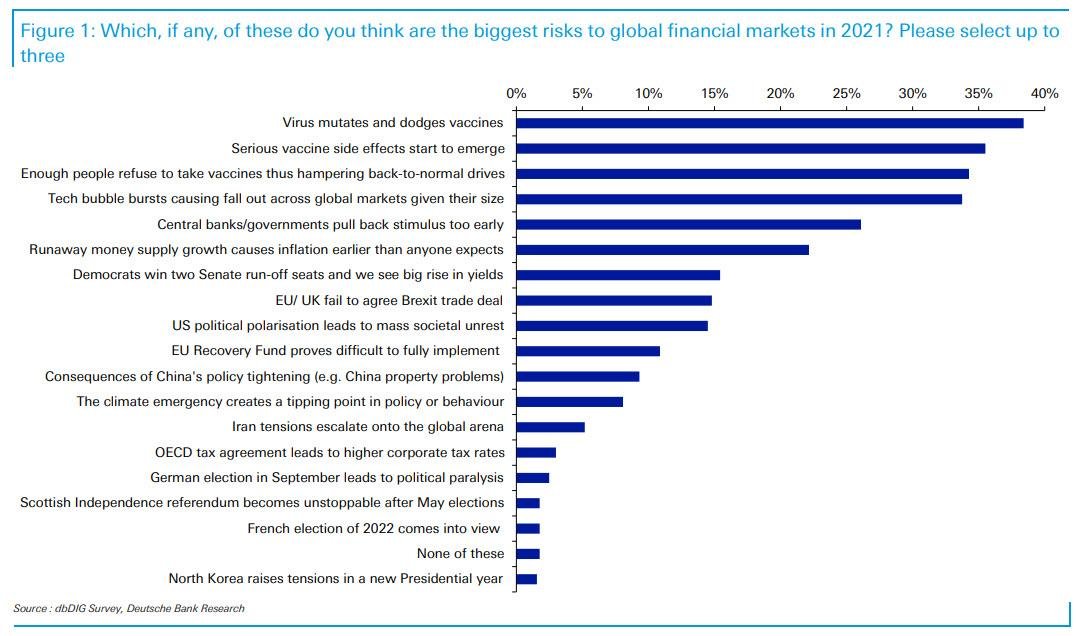 This one is absolutely terrifying - how many more people will die and long will we have to deal with lockdowns and restrictions? Why would people with means put up with staying in a country that has proven itself incapable of dealing with this crisis in an effective manner? What happens to America here? Nothing good.

Another one that spells disaster but given that there are 40+ vaccine candidates right now, maybe both not a big a deal and also inevitable that some of these will end up causing serious side effects?

3: Too many people refuse to take vaccines.

Here you end up with a world with 50% of the population being vaccinated and e.g. gyms requiring you to prove your vaccination for admittance. This seems more likely in America than elsewhere, but I’d personally rate this somewhat low in terms of risk because I would guess that places with high vaccine compliance will ease up on restrictions and those without much compliance will not (or never did) do restrictions anyway. Either way, the economy opens even if it looks different state to state.

This one is pretty obvious and is bound to happen eventually anyway, in my opinion. Well, unless option #1, #2, or #3 happens and we all work from home for 5 more years!

The Congress & Senate have failed to agree on further stimulus measures and it is becoming a problem in the US with many benefits set to expire at the end of the year. So as far this one goes, I think this is what is already happening in the United States and it’s not pretty. Food bank lines stretching for miles and increasing crime. I can’t prove causation here of course but I think it fits in line with huge numbers of jobless and the start of a deflationary spiral.

It’s important to note that in 2008 when we did QE it did not lead to inflation as people expected. But we did little fiscal stimulus and there was real demand destruction and an incredible deflationary force in the destruction of all of the credit from the fallout of the mortgage market collapse.

This time is different. Many governments are doing big fiscal stimulus programs (article link to Japan doing a fresh 708 billion dollar stimulus plan). Demand may not have been destroyed so mach as deferred. Everyone I talk to is saying how as soon as the vaccine comes out they are going to travel like crazy, go out to eat all the time, etc. So is this inflation caused by money supply growth? Maybe not, but it would be inflationary with all of that pent up demand.

Okay so those are just some possible risks. None or several of those things could occur. But I think overall you have a couple of possible outcomes to look at and they are on the spectrum of: Outcomes of the virus, outcomes of growth, and outcomes of inflation vs deflation.

My guess? I think the virus is mostly under control halfway through 2021 due the early excellent results of several vaccines and many people working toward successful distribution.

Growth outcomes may be largely dependent on virus outcomes. Either we continue of have GDP contraction globally (e.g. -5%) or we see growth again that is on trend or higher than on trend due to the snapback from the big drops in 2020.

My guess here - I think based on my optimistic prediction that there is a decent probability the virus is mostly under control by July 2021, we see some return to growth this year.

The growth is also largely dependent on how much stimulus governments decide to do. I think Japan, the EU, the UK could all end up doing a lot. The US is the big unknown because it seems likely the republican senate will seek to block anything the democrats try to do and we might end up getting austerity and deflation.

This one is the most interesting to me. Assuming the virus is under control by July 2021, and world governments are doing a lot of fiscal stimulus and keeping interest rates low I think it is possible we see a lot of inflation due to pent up demand.

My main argument here is that this NOT like the 2008 crisis. People are looking at “money printing” (increases in M2 money supply) and making memes about “money printer go brrr” and anticipating hyperinflation. I think this is incorrect. I think the quantitative easing is not the thing to look at it. There are many good arguments that QE is actually deflationary.

I think the things that inflation depends on are pent up demand and government fiscal stimulus. When lockdowns end and the virus is controlled it’s possible we see a snap back economic boom like no other. What if governments stimulate at the same time and we a lot of commodity inflation (iron, copper, lumber, etc)? Why not?

But in America, I almost see this as a coin flip 50/50 chance we see mild deflation or mild inflation. It’s likely we are slow to get the virus under control, and it’s also likely the senate republicans block the democratic administration and congress from passing big stimulus packages. We could easily go into a deflationary spiral seeing our currency (the USD) strengthen against the rest of the world while everyone else does stimulus and opens their borders to travel. It’s a bleak outcome, but to me it’s the biggest worry here.

I think my real prediction hinges on if the virus is handled by July 2021 and how governments respond with stimulus (or not). Growth and economic results are probably some result what of happens in response to those situations.

I’m making some bets on seeing some inflation but not betting the whole farm. Overall a lot of these things look like they could end up coin flips, or change drastically in either direction.

I don’t think the error bars have ever been so large on economic predictions for the future and I don’t think anyone has a good idea of what is likely to happen. One thing is for sure, when we read this later I’ll probably be wrong about some or all of the guesses I made here about 2021.